You are here: Blog Top Sedan Cars In Pakistan: Civic vs Corolla vs Elantra 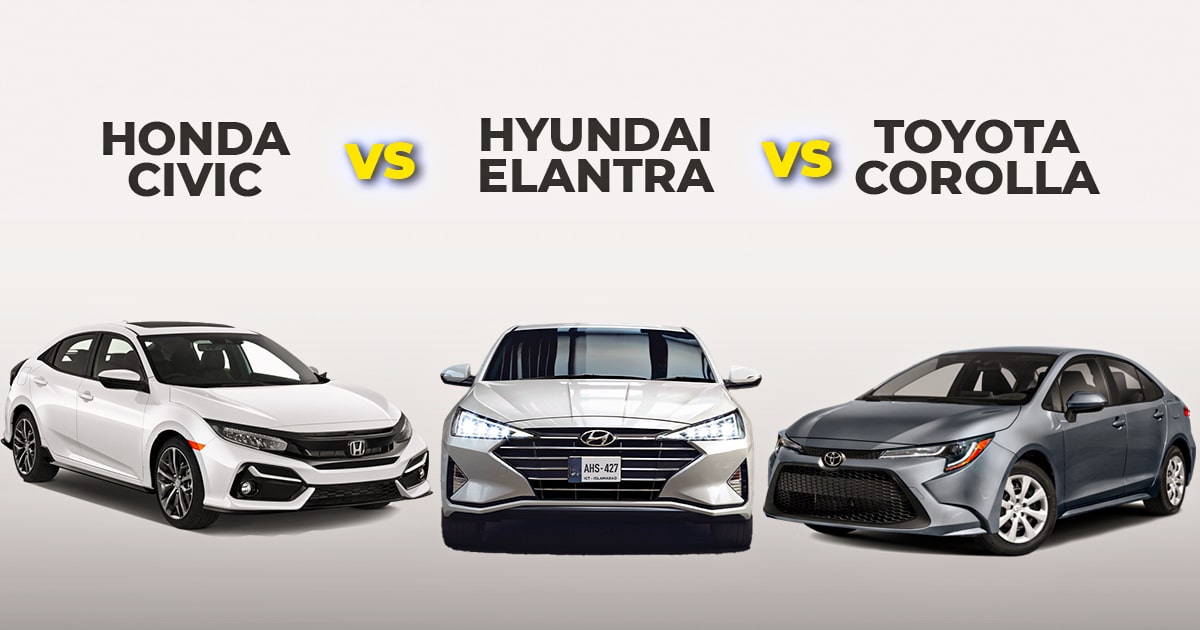 The Pakistani market is known to be a bit conservative. A major portion of the market share is confined by the “Big-3” here. Therefore, there’s not a lot of choice Pakistanis have.

Most of the alternatives end up being over swept by the bulky prevalence of these sedans. If not that, we end up facing product incompatibility or a marketing failure.

Similar is the case with the sedan cars segment. In this area, Civic and Corolla are the rulers of the game. And they weren’t faced with much competition until the launch of Hyundai Elantra this year. And the heightened rivalry is justified.

Read on to know how close the line is drawn between these top sedan cars in Pakistan.

However, Elantra comes equipped with a 1999 cc engine, produces a much higher torque of 195 Nm and 154 horsepower. Compared to the CVT auto transmission, Elantra’s 6-Speed AMT is slightly slow.

Starting from Civic, we’d say it embodies quite the sporty look. Therefore, it looks simple yet elegant and classy. In contrast, Corolla is relatively plain and gives a more common “pedestrian” feel. However, the Elantra seems to be a perfect blend of both of these styles. Moreover, it is more pleasing aesthetically as it is still a rare sight on the streets.

For the cost, we’d say both Corolla and Civic lack a little. Both of them are roomy, with 5 leather seats. But Corolla lacks a bit on the quality of material used. On the other hand, Honda Civic gives ancient cubes from inside. They accompany a 9-inch touchscreen, which is larger than Elantra’s. However, Elantra still manages to pull off a more tech-savvy and sophisticated interior.

Civic is lined with features such as the LED projection headlights, fog lamps and DRL’s, etc. The Japanese car, however, lacks in features when compared with the other two. Corolla shares a similar list of aspects, and the Elantra seems to have surpassed them in this regard.

The prices of all three of the sedans are almost the same. However, Elantra is slightly overpriced. Where others range close to 3.9 million, it goes just a bit over 4 million.

The three of the sedans are almost equally furnished with safety equipment. These include the classic airbags, Cruise Control, Rear Cameras, etc. However, all of them lack parking sensors, and Civic does not support Hill Assist.

Considering every aspect and putting it all together, we’d say it is a tough match. Although Elantra has a greater number of specs, overall, the price factor may be degrading its value. Overall, each sedan will probably retain its position, with Elantra earning a newfound adoration.