You are here: Blog Honda Vezel VS KIA Sportage – A Detailed Comparison

When talking about living in an era of SUVs, we get to see a lot of competition amongst different crossovers, especially the ones that have been launched recently. But in all this race, we forget the models who first initiated the trend and utility of crossovers of SUVs in Pakistan. We are talking about the foundation, the piling stones that led to a prominent recognition of SUVs, especially crossovers, in Pakistan.

Speaking of which, we would like to take you back to the origins of this milestone by recalling the champ of its crossover era, the Honda Vezel. We will discuss all the perks and features that Honda Vezel featured in its time that brought a revolution in that era. Along with that, we will compare a modern crossover SUV from today’s era and will match all characteristics of the two models and will see where the new generation’s crossover stands against the ones that ruled before them.

In order to choose a crossover from today’s era, it is a very wise decision to pick up the one which has been the most popular amongst Pakistani automobile enthusiasts. With that said, we will be comparing the legendary Honda Vezel with the star of the show, the KIA Sportage! By putting down the facts and figures side by side, we will give you a deep insight and will help you choose which one can be the best for you if you are looking forward to purchasing one for yourself.

Starting from such a tiny detail, the key fobs for both of the crossover SUVs are not much different from each other. However, we cannot say that they are completely identical to each other as well. One of the most notable differences is the design along with the buttons on it. The design of the key fob of the KIA Sportage gives more of a bulkier, more futuristic look while the looks on the Honda Vezel’s key fob are a bit simpler and less detailed. 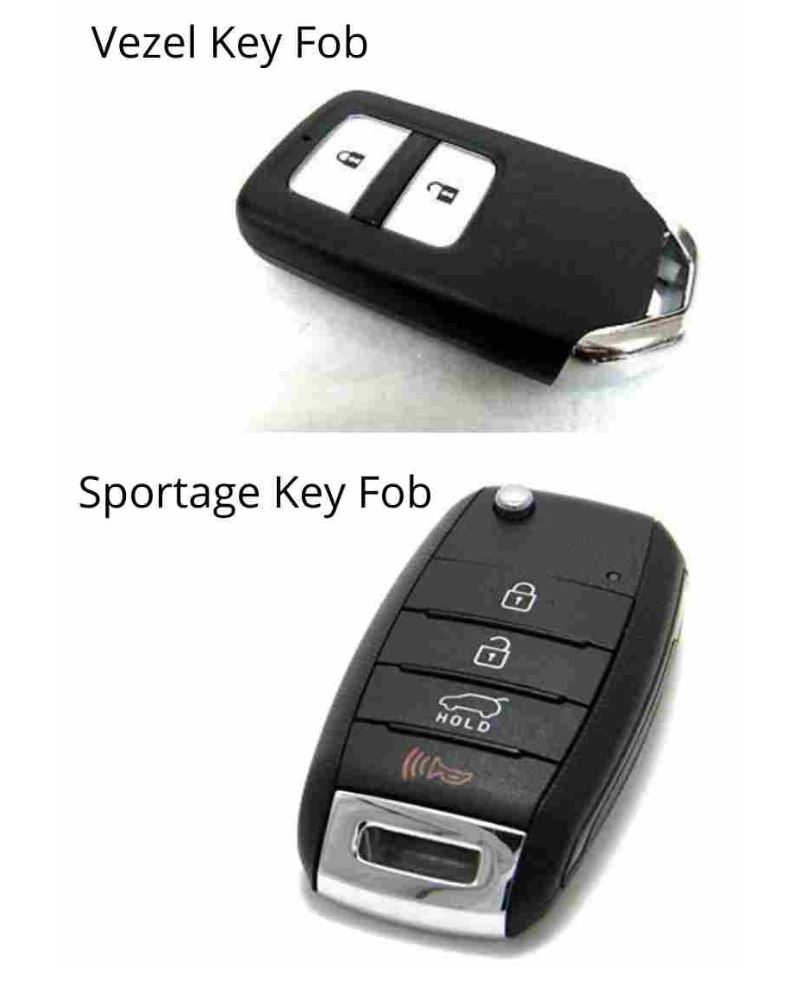 Another thing that differentiates the key fob of KIA Sportage from the Honda Vezel’s ones is the addition of the ‘trunk’ button in it. You can operate your truck with just the push of a button while it is not possible on the Honda Vezel, you have to follow the same old traditional way to get your stuff back inside the trunk when it comes to operating the trunk.

Other than that, both of the keys feature smart, keyless entry. The same contrast of silver and black throughout the structure and almost the same size.

The type of headlights introduced in the Honda Vezel back in the days was truly amazing and one of their kind. The style was not copied from anywhere and it reflected its own distinctive and unique shape and characteristics. The Honda Vezel headlights mainly feature two LED projector lamps in the centre of the headlight while assistive Halogen lamps on the inner side of it. These halogen lamps are mainly used to enhance visibility by providing high beams on the roads. A fine DRL strip is also located at the bottom of the headlight that initiates from one end and makes its way all-around to the other end.

Now compare this with the ones installed in the KIA Sportage, the KIA Sportage ones are quite attractive, aggressive, and futuristic as compared to the ones in the Honda Vezel. There is no Halogen lamp placement and everything is LED. A huge LED projector is placed right in the centre of the LED headlights with two sets of stylish DRL lamps surrounding it. There are also 7 separate LED indicators present in the inner edge of the headlight. 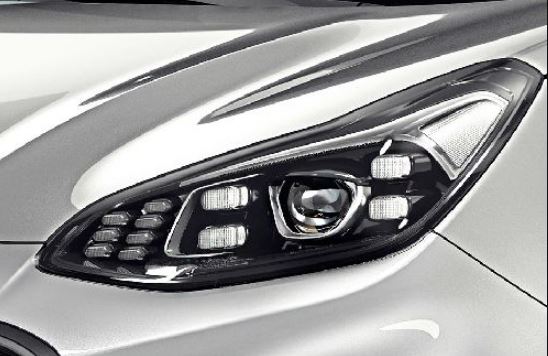 Talking about the Vezel, the Honda Vezel was quite ahead of its time. The shape that Honda featured was quite smooth yet unique and it was styled to leave a mark. A greyish-black material was used on the front that gave it a cleaner and more sophisticated look and the lack of a front grille made it a bit subtle and less aggressive. 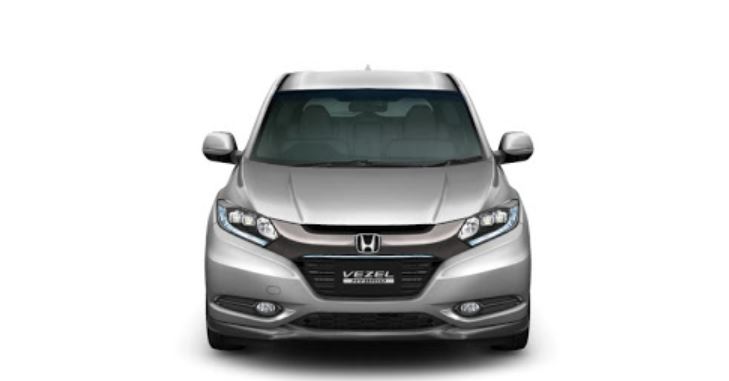 Now comparing this sophistication with the modern aggressiveness, the KIA Sportage features more of an energetic look. The front features a remarkable front grille in the piano-black shade along with chrome touches throughout the face. The looks are angry but there is still a class in it. 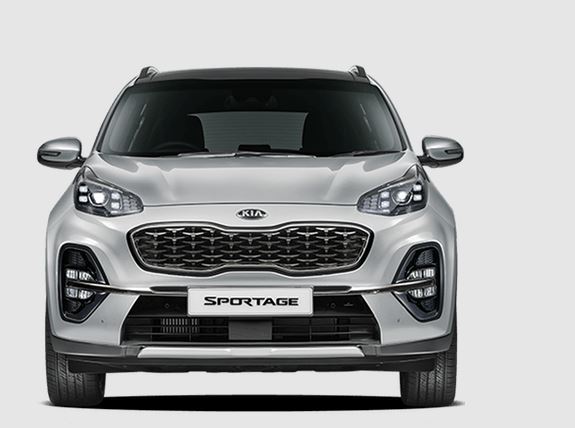 Talking about the Honda Vezel and starting with the rear taillights, the Honda Vezel features a smoother design for the taillights. The brake lamps are LED only and the rest of the light consists only of halogen bulbs. The reflectors are placed on the rear bumper. There is also a reverse camera hidden right beneath the Honda’s rear emblem. 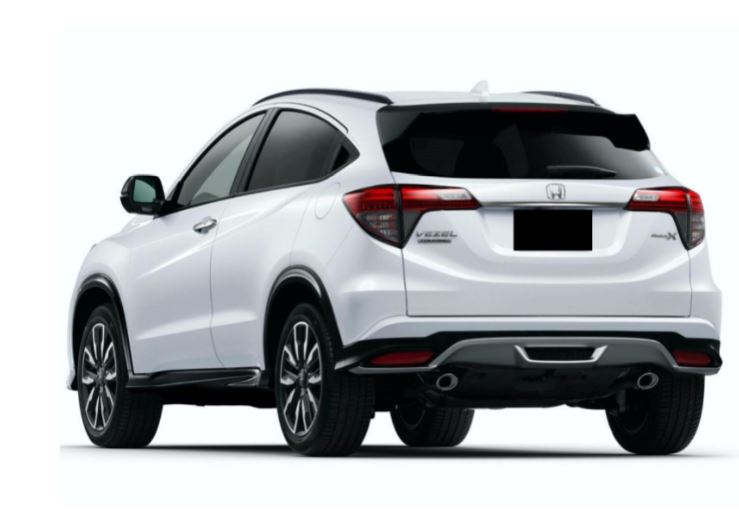 Now coming towards the KIA Sportage’s rear end, this car has been completely redefined in terms of looks and shape. The rear taillights are remarkable and consist of all LED technology. That LED feature gives more prominence and enhances more looks of the car from the rear end, especially when driving at night. One thing that can be witnessed similarly in both of these crossovers is that it has the same reflector placement, the same LED brake lamp placed on the spoiler, and the same shark fin antenna that can be visible from the rear end.

Talking about the trunk space for Honda Vezel, the trunk space is quite reasonable because it is a crossover SUV. The trunk also offers a hard yet flexible trunk separator for different kinds of luggage. One unfortunate thing is that it does not come with a spare wheel that can be considered as a disadvantage if the car gets punctured in the middle of the road or the highway.

Considering coming towards the trunk space of the KIA Sportage, the KIA Sportage offers a thin and retractable trunk separator for easy convenience and placement of goods. The space is large enough, precisely 502 liters along with a spare wheel just in case your car faces a flat tyre in the middle of your journey.

The interior can be considered one of the pivotal points for people who are genuinely interested in purchasing a car. Of course, the interior is the place where they are going to spend most of their time. Therefore, it must be outclassed. Hence, we provide you with detailed interior specifications. 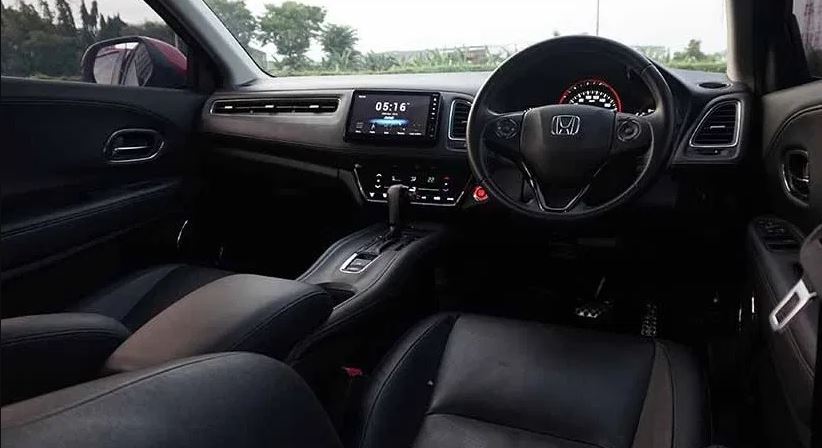 Talking about the interior of the Honda Vezel, this crossover features a delighted interior with a lot of combinations of black, hard material, beige, soft material along with chrome garnishing. This trio can be seen throughout the interior that makes the car more satisfying and appealing. The 8-inch infotainment touchscreen right in the centre of the console makes the connectivity and accessibility convenient for both the driver and the passenger. It can be said that this crossover was ahead of its time.

Now coming back to the future, the KIA Sportage offered the same, but with a more innovative style. The interior is indeed very classy and quite similar to the Honda Vezel but it differentiates from it to a certain extent as well. The steering wheel has adopted a more modern look along with the gauge cluster. You will get two gauges upfront, the RPM gauge on the left and the speedometer on the right with a digital information display in the middle. While in the Honda Vezel, you get a single massive speedometer in the centre. However, you will get almost all of the information in digital in the front. 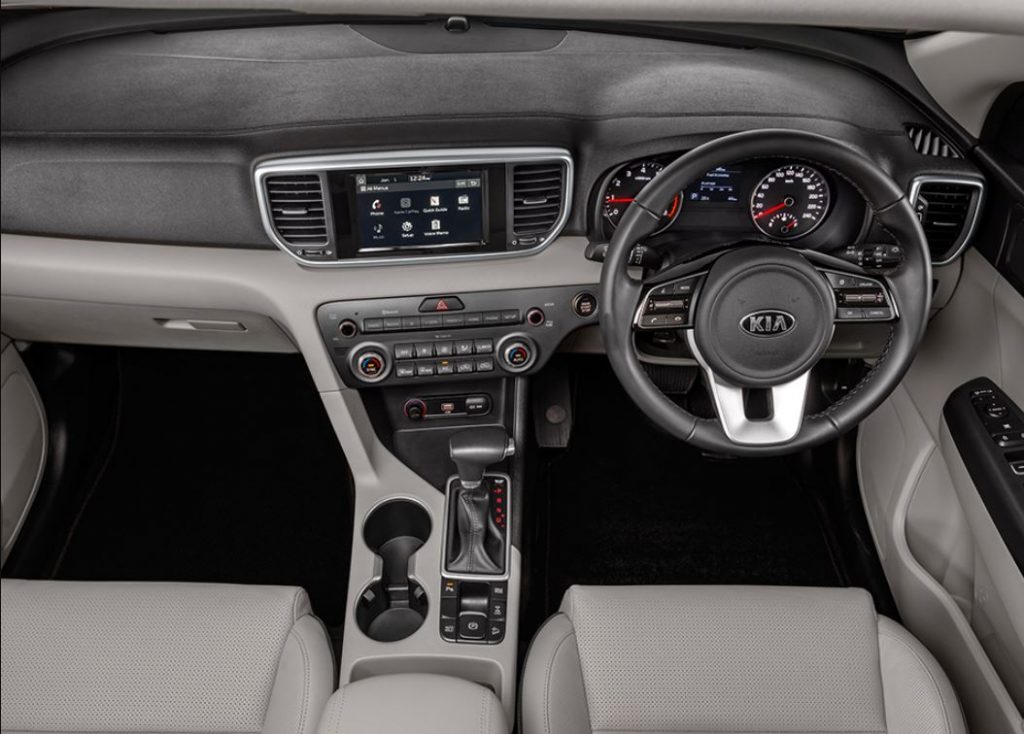 The seats are comfortable and premium, the material used is top-notch and the comfort is beyond the scale. This feature can be declared for both of the crossovers and there might not be any debate on that.

Where the Difference Starts…

When it comes to the comparison of both of these crossovers in terms of luxury, comfort, and exterior, they might share some similar stance but the difference is being carried immensely when it comes to the performance. The Honda Vezel shares 8 different versions (or variants) for their imported category. Those versions vary from offering automatic petrol to automatic hybrid. However, the engine capacity offered is 1500 cc (1496 cc to be precise)

On the other hand, the KIA Sportage offers a better engine. The numbers go up to 2000 cc (1999 cc to be precise) along with three different variants for the Pakistani market. The choice is limited and simple and there is not much brainstorming for choosing the right model from a huge variety.

The next prominent factor that distinguishes Honda Vezel from the KIA Sportage is its local and international assembly. Honda Vezel is an imported unit that has been recalled as a JDM. For your information, JDM stands for Japanese Domestic Market. This means that the cars that are labeled as JDM are only limited to the Japanese market. So Honda Vezel being a JDM is a Japanese car that can only be imported to Pakistani grounds.

In contrast to that, the KIA Sportage is a crossover that is assembled locally in Pakistan. There is no such hassle as compared to the Honda Vezel and you get a freshly manufactured unit that is made in Pakistan.

Although both of these crossovers have been released in their respective eras, their prices are almost equal to each other. Honda Vezel made its debut in the Pakistani market around 2013 and is successfully being imported ever since. The price tag on this imported crossover rests around PKR 4 million – 5 million, depending upon the year of manufacture, year of import, mileage covered, and the condition of the vehicle.

On the other hand, the newly-released KIA Sportage costs around PKR 4.5 million – 5.5 million, depending upon the type of variant you choose.

So, whether you want to choose the Honda Vezel or the KIA Sportage, the decision rests on your shoulders. It solely depends on one’s preference as well. If you are more into JDM cars and like to ride on an imported crossover, then the Honda Vezel can be your choice. If you are a fan of locally assembled vehicles and do not want to use a second-hand ride and want the first-hand experience along with all the latest tech and features, then KIA Sportage can be your ultimate preference.