You are here: Blog Toyota Land Cruiser 2022 | A Detailed Analysis 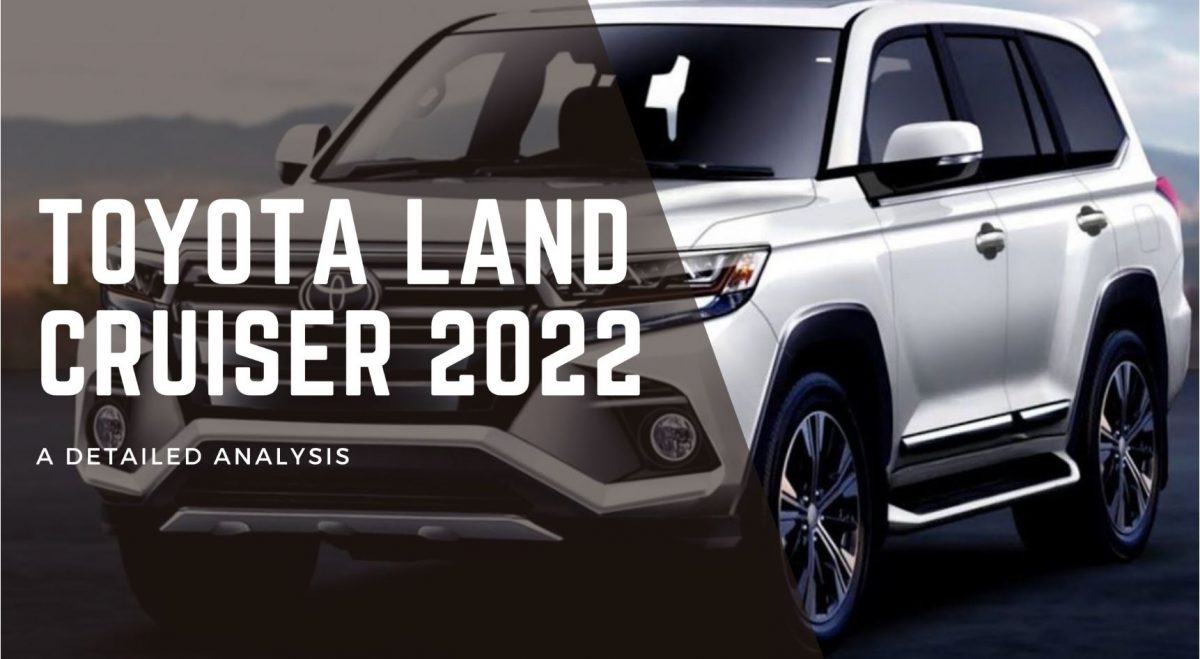 When it comes to discussing one of the most premium, refined, and polished automobiles of the whole time, we can never neglect the prime essence of the Toyota Land Cruiser in Pakistan. This complete package rests in the finest places of respect we can give for automobiles in Pakistan. With an immense amount of spectacular capabilities of conquering the grounds, both on-roading and off-roading, the Toyota Land Cruiser is the number one priority for those car enthusiasts who prefer the extreme amount of luxuriousness from their off-roading beast.

Packed with an insane amount of numbers under the hood, the Toyota delivers the usual land cruiser V8 engine in all of its available variants with an amount of horsepower ranging from 301-381 bhp. The performance numbers are indeed quite impressive along with other efficiency factors that make it an ultimate choice.

With the amount of progress with time, the Toyota Land Cruiser has improved significantly both in terms of power and performance. The engine has been made more powerful, the performance factor has been improved and the efficiency has been enhanced to a better level.

Speaking of the progress, the latest installment of the Toyota Land Cruiser’s pics has been leaked to the public. With that being said, the expected 2022 version of the Toyota Land Cruiser V8 has considerably been improved in a lot of aspects, varying from under the hood to enhanced visuals and looks. Also, there are certain tweaks from its predecessor to make its prominence even better (or challenging). 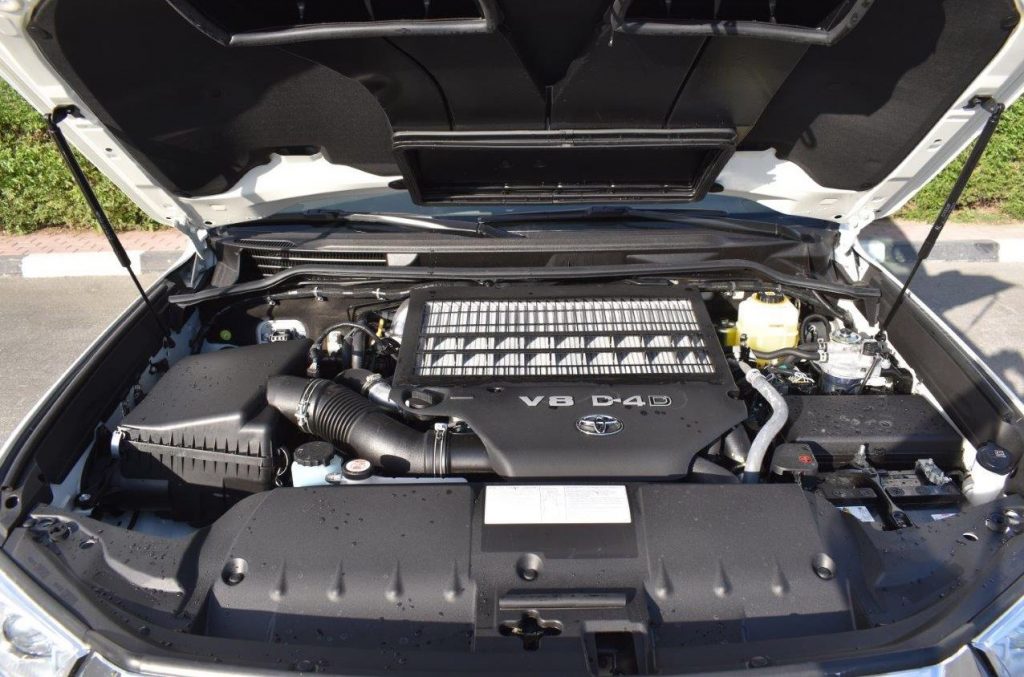 Extracting the crust from a pile of rumours floating around what will be under the hood, it has been expected that the new version of the Toyota Land Cruiser will be having a swapped engine of 3.3L V6 from the traditional V8 engine. This new introduction features its similarity with the couple of other flagship sedans including the famous Lexus LS 500H, rumoured to be a hybrid unit.

Speaking of the other variant the Toyota Land Cruiser V8 has to offer for its 2022 variant, the next version will most likely carry a hefty 3.5l twin-turbo V6 engine which is considered to be a non-hybrid breed.

Coming towards the power these engines will produce, you will be 354 bhp from the regular LS500h sedan while an improved number to 416 bhp from the twin-turbo version.

Even if you are not satisfied with such a downgrade in the upcoming Land Cruiser models than its predecessors, the other variant can be expected that may become a reason of disappointment to the conventional land cruiser v8 enthusiasts. The third expected version can feature a 3.3L V6 diesel engine. So, we can expect to see the performance altering significantly in the newer 2022 land cruiser variants. 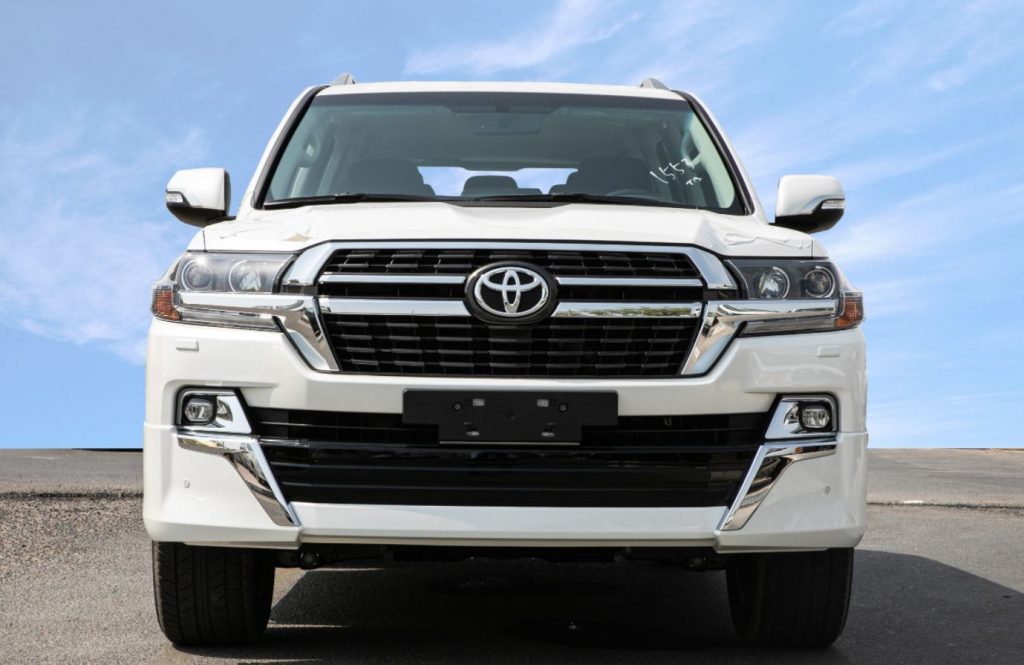 Now coming towards one of the most prominent factors that distinguish the newer 2022 land cruiser from its predecessor Land cruiser v8. The older version had a more ‘bulky’ look along with huge headlamps with traditional fog lamps that carried all the classical vibes from the past few years. For the upcoming year, however, the Toyota Land Cruiser has made some substantial improvements throughout its design and made it more appealing.

Going through its detailed analysis, the front end has now been made more subtle and modern as compared to its former model. The headlamps have been redesigned expressively, leaving behind the old and outdated design that was carried out for many years. The headlamps have been scaled down to match the sensation of the overall design. There is a huge strip of DRL right beneath those 3 LED projection lamps for extreme visibility during the drive.

There is a black-themed grille that starts from right below the headlamps and then extends to cover the bottom of the main front grille.

Talking about the front main grille. This chrome-plated significant signature piece has completely been reshaped by featuring a huge Toyota emblem up front, in the centre of the grille along with huge chromium horizontal bars stealing the spotlight. The grille extends down to the bumper where it meets the extended blacked-out separate grille stance that originated from the bottom of the headlamps.

Coming down to the fog lamps, the fog lamps have been reshaped as well. The new design features distinctive fog lamps covered around the piano black fog lamp covers that are again covered by a neat-looking chromium garnish. This whole package of fog lamps exceeds one’s expectations and elevates the looks of the Toyota Land Cruiser to a whole new level.

Talking about the sides of the new Toyota Land Cruiser 2022, the newer version features a suppressed and a ‘low’ profile by the reduced bulges on the fenders. The arches on the chassis above the wheels have been reshaped, redesigned, and given a better ‘polygonal’ shape. Talking about the side mirrors, this time, their place has been changed and now they’ve been mounted on the doors instead of their regular place in the windows.

We can also expect a massive size of alloy rims, ranging from 17-inch that can go way up to 20-inch for better aesthetics and performance. 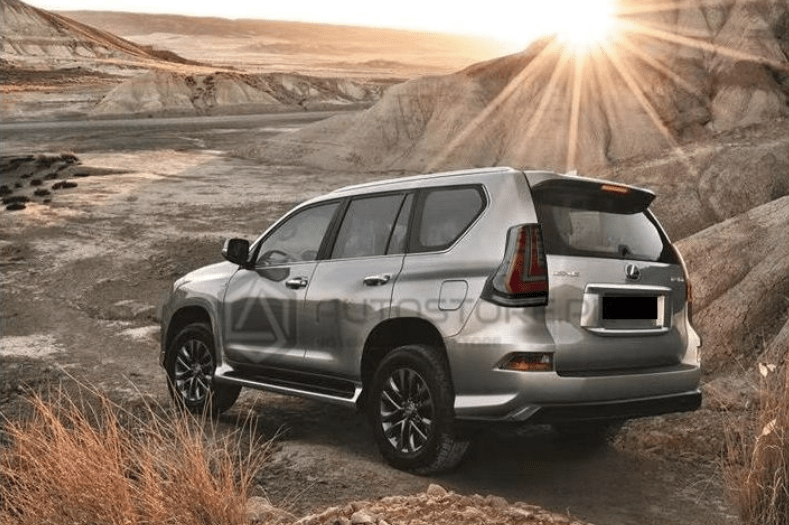 Just like the front end, the rear end has been improved to progress towards the subtleness as well. The rear part has also been given a less ‘bulgier’ look along with the element of sleekness and subtleness. The tail lamps have been rebuilt to match the fineness of the front end. The design has been reduced up to a great extent that made the overall tail lamp look smaller and more stylish.

The number of details has been reduced and it looks like Toyota is focusing more on suppressing the loud details and replacing them with something quieter. A major piece of chrome garnish has also been removed from the newer models where it stated ‘LAND CRUISER’ in bold and capitalized words. Coming towards the down end, the size of the reflectors has greatly been reduced as well. They also have been relocated to a more ‘hidden’ location where they are not meant to disturb the overall looks from the rear end. Other than that, the rear spoiler along with the rear windshield wiper has gone through some minor changes that did not reflect many conversions.

Apart from the exterior changes, the following list of features can be expected from the next generation Toyota Land Cruiser models:

1) A fairly large infotainment system with a touchscreen of around 12-14 inches.

4) A full conversion to a 7-inch digital display in the front gauge cluster.

When is the Release Date:

Although this new model will start hitting the international market in a few upcoming months. However, the Pakistani market will be facing a significant delay while getting this model available for the Pakistani SUV enthusiast. So, we can expect the launch of the Toyota Land Cruiser 2022 at the end of 2022.