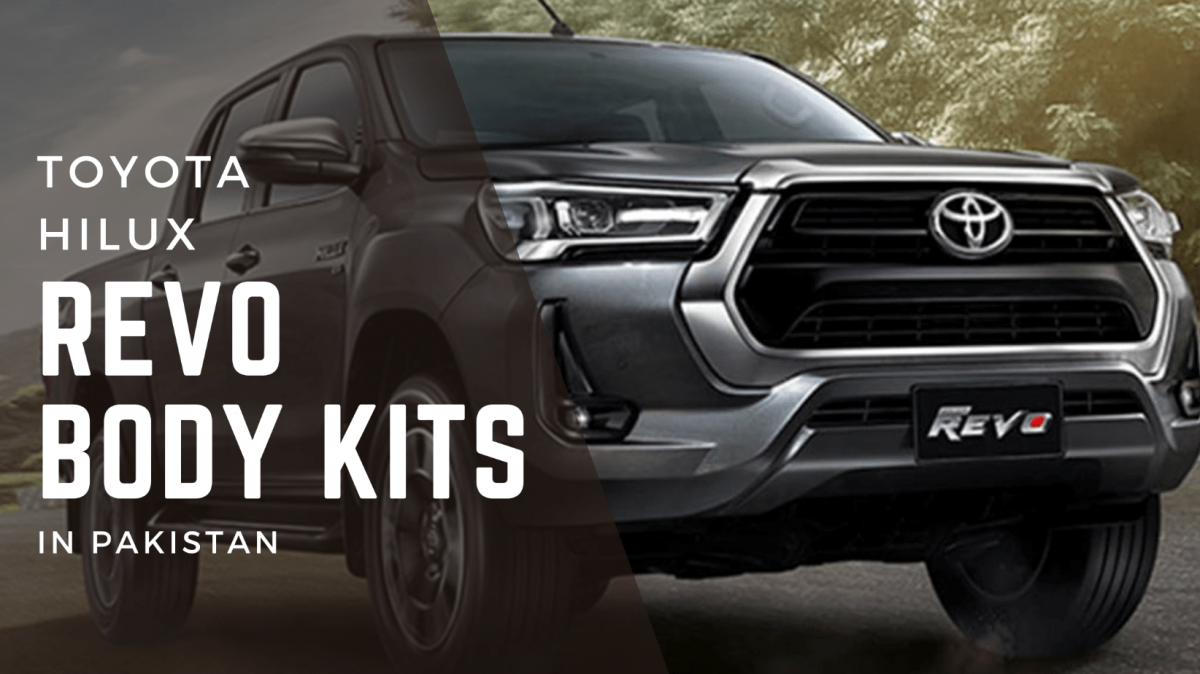 Better known for its multiskilled capabilities, Toyota Hilux Revo became an immense symbol of perfection and utilization in various environmental biomes that defines its substantial utility and versatility. You can drag this 4×4 pickup truck on steep mountains to conquer all those edgy mountains, or you can take it for a smooth highway ride to Murree or Gilgit Baltistan along with your luggage for the best trip experience. No matter how rough the journey is, The all-new Toyota Hilux Revo covers you everywhere.

With the power this beast possesses, it can conquer the offroading world within a blink of an eye. Its enormous 2755cc diesel engine produces power beyond an average person’s expectations.

With so much power under the hood, it is expected to show off its capabilities on the exterior side as well. For that aspect, we’ve covered you pretty amazingly by offering several external body kits for your Toyota Hilux. Our body kits will improve both your Revo’s exterior aesthetics and muscularity and will bring a huge change to your 4×4 pickup truck’s surface. 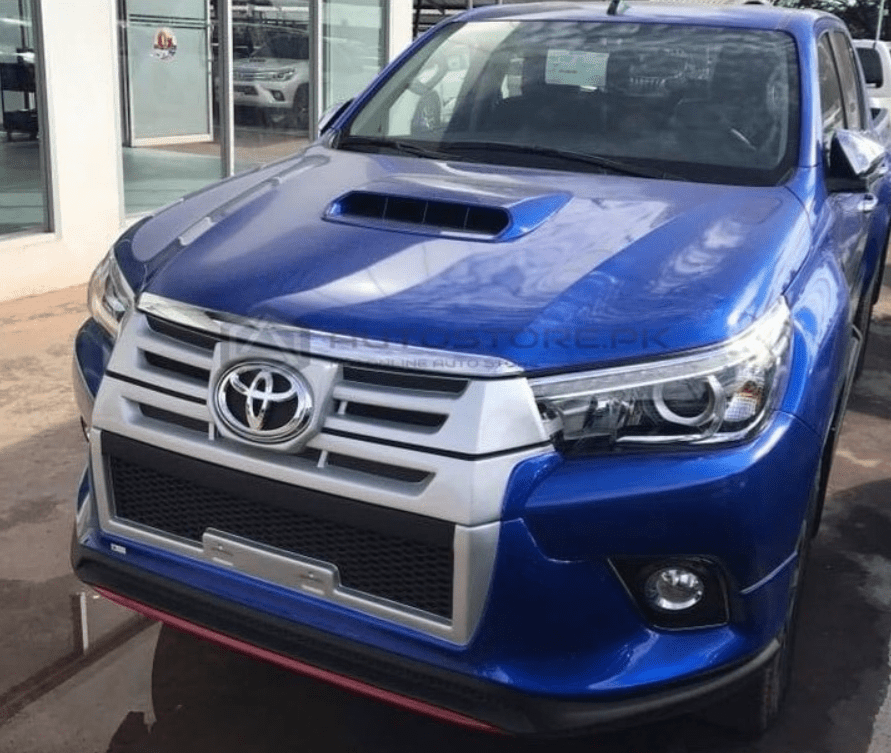 Although this body kit does not reflect any sort of aggressiveness or roughness, it represents an art of grace and elegance that improves the overall visual aesthetics of the Toyota Revo.

The body kit mainly consists of the frontal part of the Toyota Revo that comprises a classy grille along with an extended front bumper. The grille possesses a huge Toyota emblem on the center that is surrounded by massive chrome bars that mainly cover the grille. This silver coating extended to the inner edges of the headlights, giving an impression of a unique continuity.

When talking about the bumper, the chrome garnishing further extends to the lower end of the Toyota Revo. A huge cross-shaped black mesh covers most of the place in the front while the chrome grading surrounds it, making it an overall complete package.

The fog lamps are surrounded by chrome coverings along with black fog lamp’s vents for increased prominence in the streets in the daylight as well.

At the very bottom of the front bumper, we have a decent splitter that increases Toyota Revo’s sporty looks. The splitter is detailed with a red bar that gives a unique contrast along with unparalleled sportiness on your Toyota Hilux Revo. 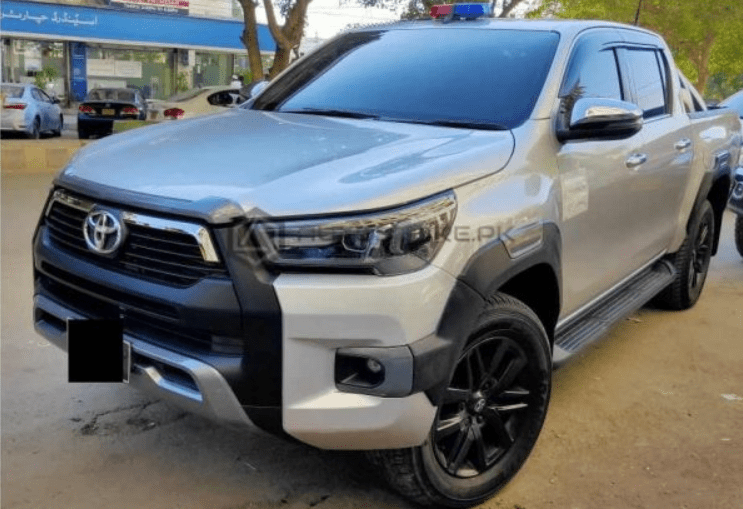 Second on our list is none other than the best solution we offer for you and your Toyota Hilux to convert your regular Revo into a sportier, advanced, and notable Toyota Rocco. This enormous Hilux Revo to Rocco facelift body kit gives huge leverage to your 4×4 pickup truck over a normal Toyota Revo. This ridiculously insane shape gives the most phenomenal experience you can expect from your ultimate 4×4 Toyota Revo.

Again, this body kit mainly rests its focus on the front part as well. The body kit now announces the new, blacked-out front grille bars as an indication of the unique Toyota Rocco model. There is a prominent silver or chromed-out bar on the top of the grille, just beneath the black covering bar for the best contrast—the main Toyota emblem in the middle and surrounded by horizontal black grille mesh.

Now moving towards the bottom, we can witness the same continuity of the dark-themed bumper along with few prominent vents to both better functionality and visuality. The fog lamps are covered in a unique cover that grows outwards and touches the front fender.

This all-new Toyota Hilux Revo to Rocco Facelift Body kit gives the best solution to enhance your 4×4 Hilux to a whole new perspective. 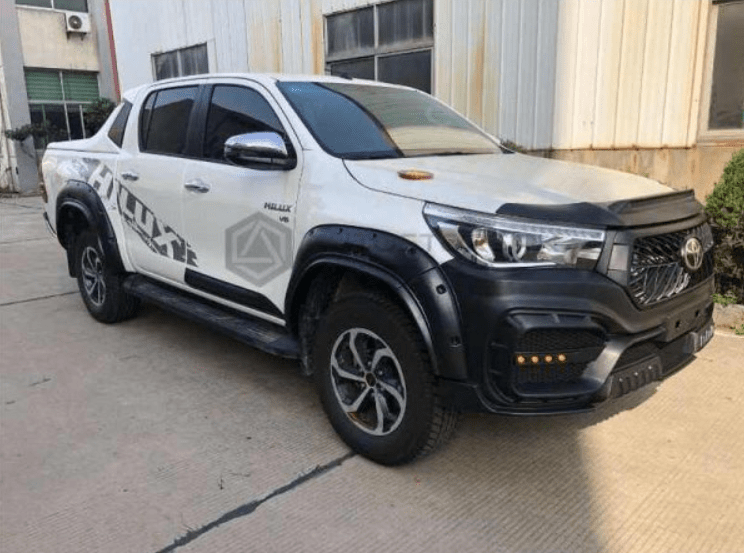 Being third on the list, this type of facelift body kit gives the best offroading aesthetics to the Toyota Hilux Revo. Being the only recommended body kit in the list that features extreme versatility and strength to your Toyota Revo, this all-new Revo to Rocco Wald Style Body Kit represents the actual muscularity and robustness of your Toyota Revo. Also, it features the all-new Toyota Rocco’s conversion so it is a plus when it comes to the facelift.

This particular body kit features all the blacked-out front parts of your Toyota Revo. This time, the Toyota’s emblem is an optional feature in installing this body kit. It does give a sportier sensation when the emblem is removed, indicating that only performance is focused on this machine and nothing else. The black hexagonal mesh with huge vents shows that this body kit primarily features highlighting the offroading aspects of the Hilux. Two silver chromed-out vents are also present in the front grille that gives a unique contrast to the vehicle. The bottom part is all blacked out. 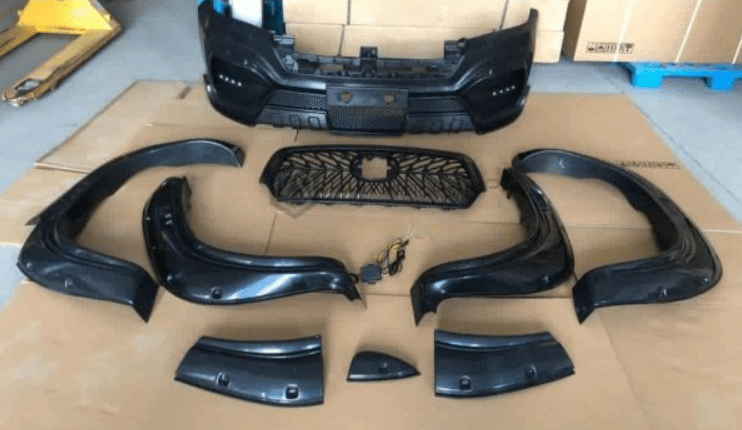 The fog lamps are replaced with four LED projections on each side that cuts out excessive energy consumption to give the maximum visuals on the streets at night. A blacked-out piece is also included in this body kit that is placed on the front edge of the bonnet that serves as a continuity of a set of blacked-out side fenders that completes this body kit by solving the last puzzle piece of this enhanced exterior structure.

These are the top 3 amazing body kits for your Toyota Hilux Revo. The astonishing blend of aggressiveness along with enhanced shape and structure gives your Toyota Hilux Revo a completely new look. Being one of the most trendy products in the market, these body kits are indeed hard to find. The main concern regarding Toyota Hilux’s aftermarket parts is its genuineness, durability, and quality. That is why we recommend you always purchase your car’s accessories from autostore.pk. Autostore.pk serves as the only liable and authentic source for genuine products in the best price range.