One of the most innovative introductions in cross-over SUVs in Pakistan, the all-new MG HS 2021 leads to a completely different era of revolution and creativity. This Front-Wheel drive cross-over SUV brings the best features and performance as compared to its competitors and places itself on the top preferences in the Pakistani market.

A Little Bit Of The Past And The Present:

Discussing a little bit about the origins of the MG HS, this brand established its foundations a long time ago in the 1920s. Considered one of the top ten automotive brands, the MG is widely known for its quality, performance and reliability.

MG is an abbreviation of the term ‘Morris Garages’, the actual name of the brand. This brand was fundamentally a label of the United Kingdom but now it is owned by a SAIC Company which is a Chinese automotive corporation. Although the main headquarters rests in the capital and the largest city of the United Kingdom i.e. London but the manufacturing and production stage is being carried out in the Republic of China.

We have compiled the result of a detailed analysis of the new crossover SUV aka MG HS starting from every single detail on the exterior as well as in the interior. The performance capability and fuel average. At the end of this review, you will be able to know why people are preferring this new brand over the ones that had some foundation in Pakistan.

What Is Under The Hood?

Talking about the numeric facts related to the MG HS, the MG HS comes with a huge 1500cc turbocharged engine. The actual number goes for 1498cc for the power of the engine. MG HS gives 160 horsepower and gives an exceptional fuel average of around 12-15 kilometers per liter. 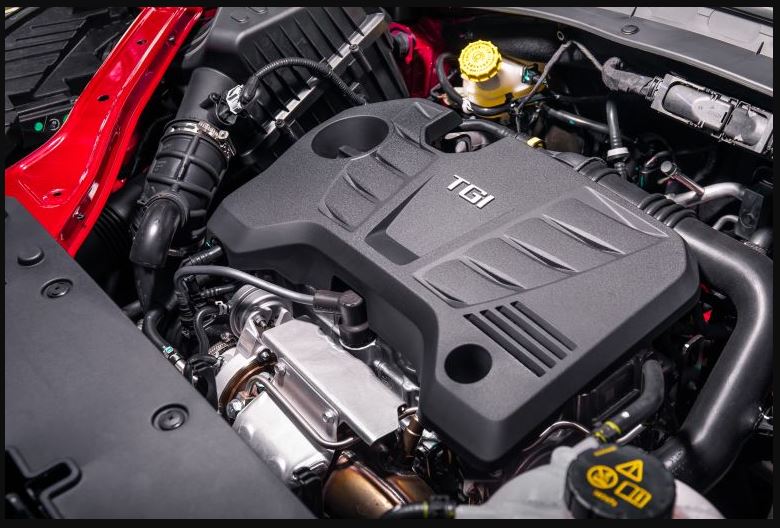 Starting off with the magical switch that ignites the power of this crossover, the key fob is made in one of the most sophisticated and premium styles of all time. One of its sides consists of a Huge MG logo, prominent in the center of the fob along with a ray of coloured line that has been spread to 3/4th of its edges. The colours tracing on that key fob will be meant to match with your MG HS. No matter what colour of MG HS you own, you will get the exact tone on your key fob as well. (just in that edged-out colour ray of the key fob).

The other side of the key consists of three buttons for easy accessibility. One is for locking the car while the other is for unlocking it. In addition to that, there is another button that opens up the rear trunk.

Starting from the frontal looks of the MG HS, one of the main things that will grab your attention will be the mesmerizing headlights. The headlights of this crossover SUV are composed of Xenon projection lamps for better visibility and prominence on the road. The headlights have been designed beautifully along with modern and futuristic looks in order to stand out from their competitors. As you now know that MG is owned by the SAIC automobile industry, you can see a little branding of ‘SAIC LIGHT TECHNOLOGY’ inside the projector headlamps. Also, a graceful set of DRL strips is widely spread across the headlamps for better clearance. The DRLs are present above and below the xenon headlamps. Talking about the Fog Lamps, they have also been designed in a modern look with chrome garnishing around it.

Now comes one of the main selling factors of this crossover SUV and one of the most attractive things in it. It is none other than the mesmerising grille that SAIC motors offered in this model. The grille, like no one in the competition, consists of a beautifully synchronized chrome grille that includes shiny chrome garnishing. The chrome bumps are arranged in such a harmonized way that it gives a look at the stars in the sky. That is why MG has stated the grille of the HS as the ‘Galaxy Grille’.

There is also a huge MG logo right in the middle of the grille. This logo is known to be the largest one ever produced by MG. A camera is also hidden beneath the logo and blended in the black theme that serves as a 360-degree viewing camera. We can further witness a bumper splitter lip with moderate silver trimming.

Hence, we can say that the overall look of the new MG HS is very aggressive and futuristic. It can certainly draw many eyes towards itself when running down the road.

When proceeding towards the sides of the MG HS, the most notable feature that is noticeably viewable is the huge size of the rims. MG HS comes with a huge 18” diamond cut, aluminium alloy rims that foreshadow its muscularity on the road. The crossover SUV comes with standard Michelin tyres as authentication or reliability. These tyres provide sufficient grip to the car on the road for better handling.

One noticeable feature above the wheels is the black-coloured flare fender that covers up quite an area above the wheel. This black-themed fender cover gives a super sporty look along with a touch of versatility.

Talking about the door handles, the handles come with a keyless smart entry and are coated beautifully with a shiny chrome material. A similar type of chrome garnishing can also be seen all around the side door panels as well.

As the MG HS is a big cross-over SUV, it consists of a good ground clearance of around 175 mm.

Starting from the taillights, the MG HS also features LED taillights for the rear end. A sizable emblem of MG is placed in the center with another camera hidden beneath the logo. This camera serves as both the reverse camera as well as a 360 one. 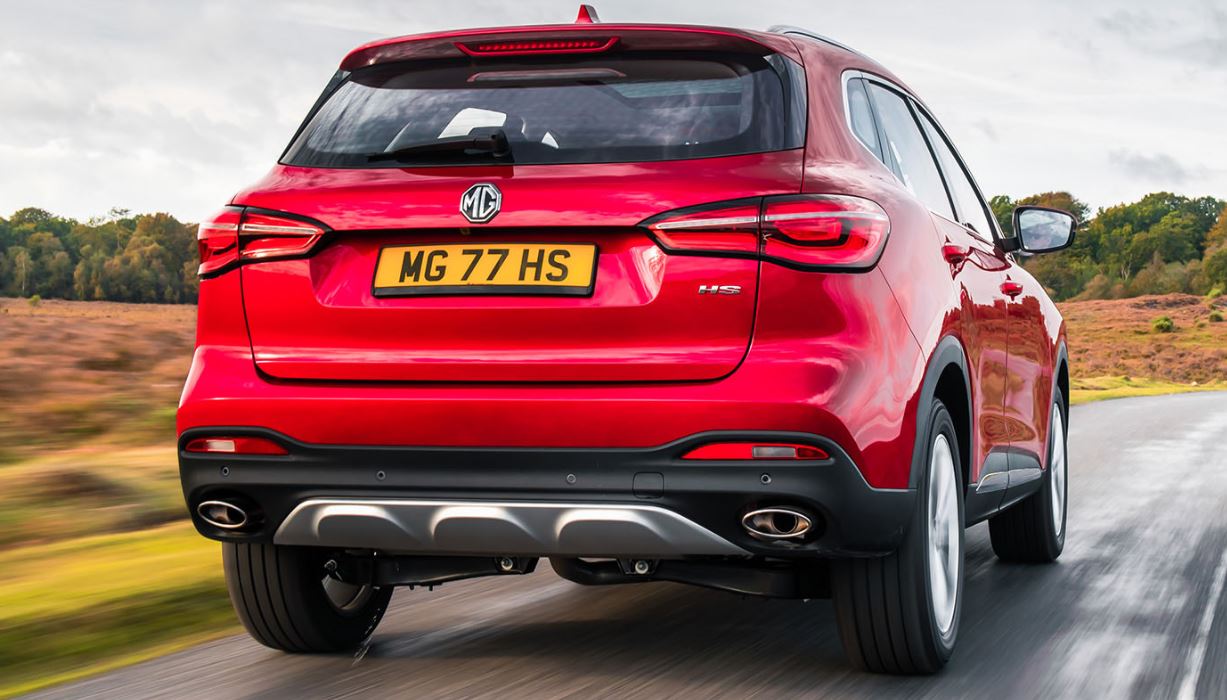 Glancing on the top part of this huge crossover, a swift shark fin antenna along with two silver rails are visible that provides deep contrast to the exterior and covers the game from the top.

Descending to the bumper, we can see 4 parking sensors along with a diffuser on the very bottom with silver trimming for an attractive contrast.

MG HS has a lot to offer to you from the inside as compared to the outside. This crossover blows away everyone’s mind when things start to get intense and exciting related to the interior. We can get three different colour themes when talking about the MG HS interior. Those themes are red, brown, and black. Any of these themes can be preferred without any additional charges.

Talking about the materials of the doors, we can witness a mixed composition of 50% of soft leather along with 50% of hard plastic. The door panel is attractively designed to meet the innovation of the interior. A prominent and welcoming MG badging is also placed when entering the vehicle. 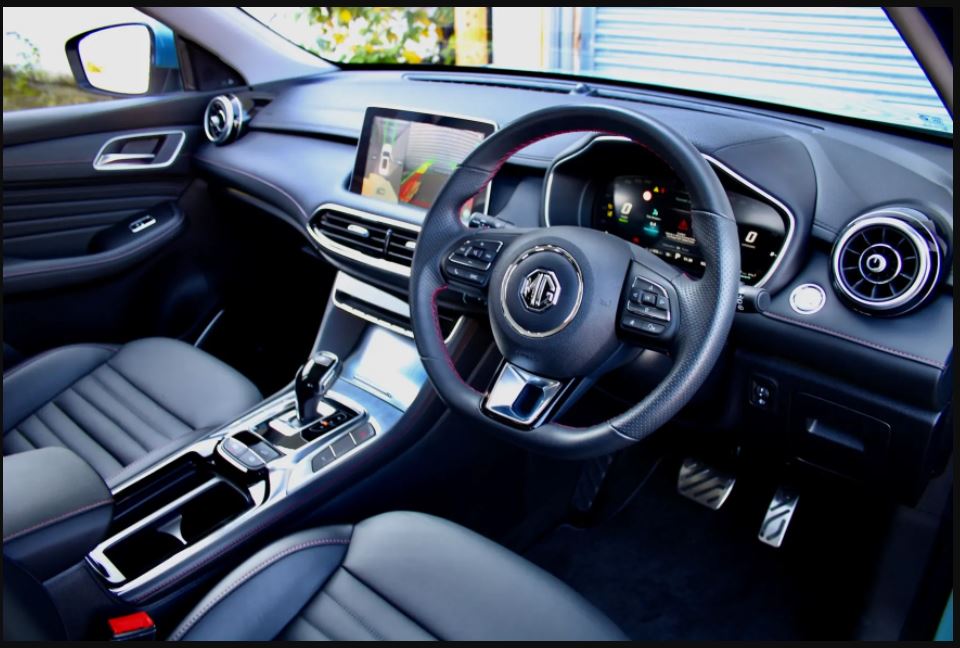 The first thing you will notice after climbing inside the MG HS is the elegant steering in front of you. Designed with luxuriousness along with a touch of sportiness, this steering wheel gives the sensation of other premium vehicles. The steering wheel is of a bottom-flat structure that triggers the sporty factor inside MG HS. However, this bottom-flat structure is not the only thing that makes this car look sporty. There is a catchy red button on the steering wheel which is named ‘Super Sport Mode’. That red button activates the ‘Sport Mode’ inside MG HS and provides an extra performance to this family crossover SUV.

Apart from the ‘Super Sport’ button, there are a number of operable power buttons that control both the infotainment screen and the multi-information display behind the steering wheel. A set of paddle shifters is also placed behind the steering wheel just in case if you want to roll your crossover SUV with a manual transmission. With a top-quality and premium leather-stitched steering wheel, you can feel the ultimate driving experience you can expect from the MG HS.

In considering the safety factor, the MG HS offers a package of 6 SRS airbags that fills up during the accidental collision of the car in order to prevent passengers from any serious injuries. 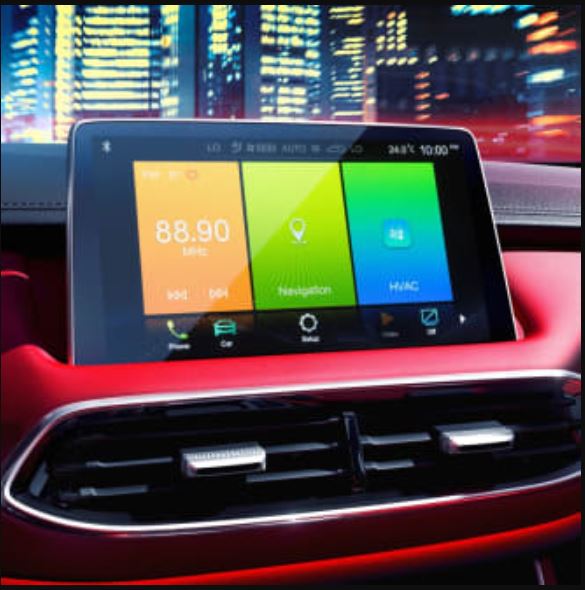 Now talking again about one of the centrally-focused features of this extravagant SUV, the infotainment screen or the multimedia screen focuses on almost all the car SUV. All the controls related to MG HS are actively present inside its massive screen along with various other multimedia functions like video player, music player, calling, Bluetooth connectivity, etc. Pairing with mobile devices with the help of android play or apple car play can also be utilized with the help of the multimedia screen.

The gear level is pretty subtle with a class and a number of other features are surrounding it in the form of buttons. These features vary from different drive modes to hazard lights. An armrest is also present behind the gearbox for the driver’s comfort. 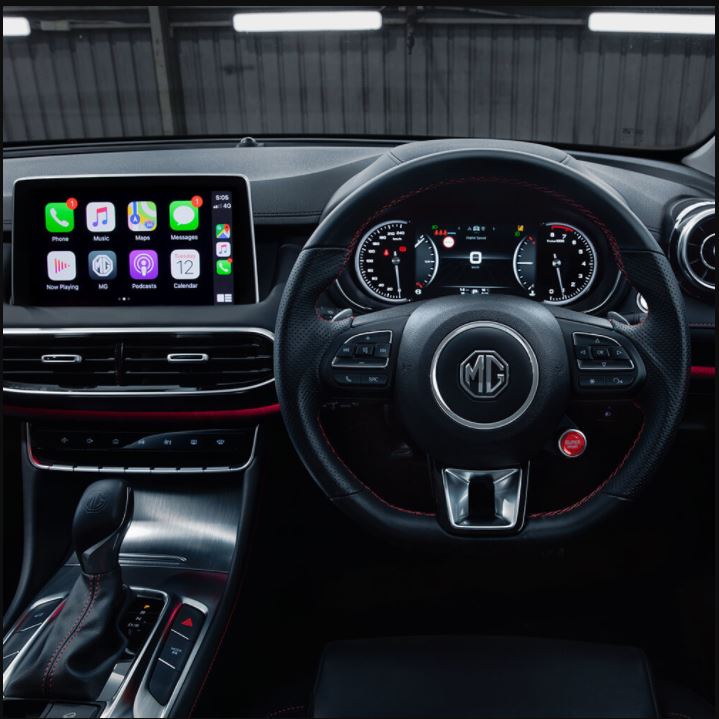 Talking about the overall material of the dashboard, you will get soft padding on the top surface, then a soft leather coating in the middle of the surface along with a combination of hard plastic at the end, where the luxury is least expected.

As far as the seating system is concerned, the seats are premium stitched with the finest leather and comprise extreme luxury and comfort. It makes you think that you’re sitting on an A-Class Mercedes Sedan or a Luxurious BMW. The leather is extremely fine and the comfort is up to the mark. The rear capacity is huge and can easily carry adults to a long route. The rear seats consist of two luxurious seats with an armrest in the center, when opened, it reveals an armrest with a hidden storage compartment beneath. A set of cupholders can also be revealed when the edge of the armrest is pressed. 2 Air conditioning vents along with 2 external USB ports are also available for the rear passengers in order to let them charge their mobile devices. MG HS carries out a great amount of attention to detail throughout the car, starting from the cockpit to the boot space. Talking about the boot space, the MG HS offers an enormous 463-litre boot space that is enormous as compared to its rivals. There is also a boot separator which is quite easier to operate than the rest of the crossover SUV due to its side rails.

By lifting the covering up, we can also see a Stepney tyre beneath the boot base.

The only downside worth mentioning that can be a good drag regarding sales of this car is the lack of floor mats from the company’s end. The car comes with no floor mats. This means that if you are looking to climb inside your car by jogging yourself through a wet path, a muddy area, or on a rainy day, you will definitely mess up your car’s interior for good. Luckily, autostore.pk, Pakistan’s leading automotive aftermarket car accessories store offers premium 9D Floor Mats for your car’s protection, giving another layer of protection from environmental pollution. For now, two types of 9D Floor mats are available for MG HS. One is Black with red grass while the other variant is black stitch with black grass. Other than that, you can also avail of a variety of side steps as well.

One of the newest introductions in the field of crossover SUVs, the MG HS has significantly left an impact on the crossover SUV industry by introducing exceptional features in the market. It may have a future in the Pakistani market but an unfamiliar brand is hard to trust. Along with this unfamiliarity, the lack of a basic essential i.e. floor mats can be a huge bummer in the sales as well. However, if you are looking for a sporty yet subtle crossover that gets all the job done, the MG HS can definitely be an option worth considering.