You are here: Blog A Comparison Between the New Toyota Corolla Cross & Top SUVs 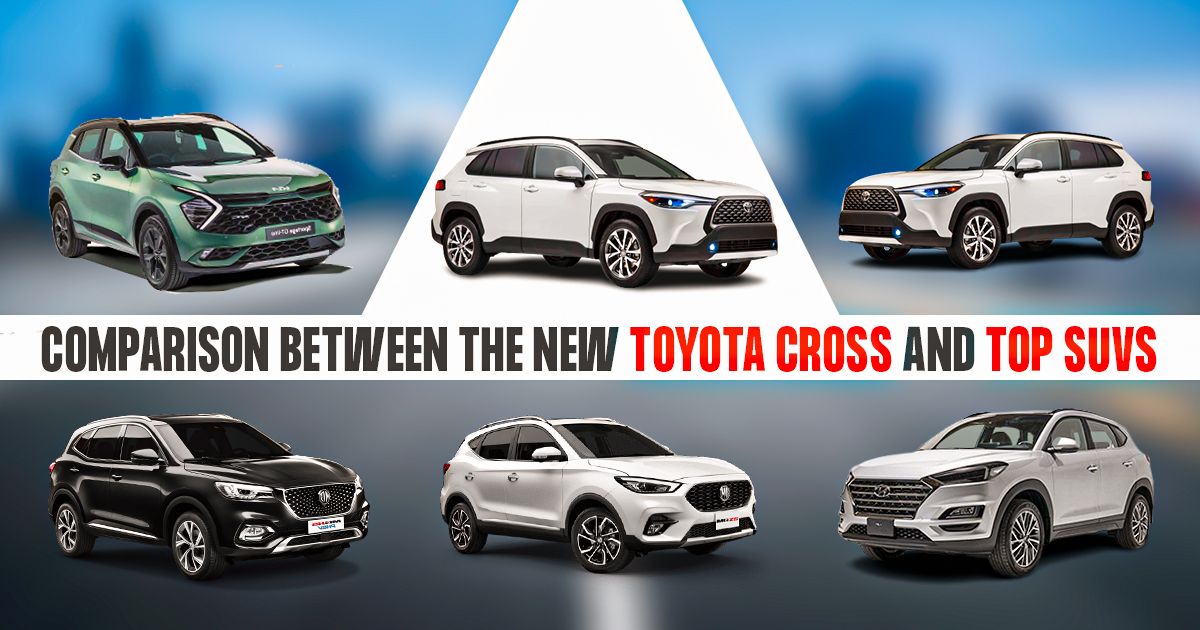 The car industry is constantly evolving, with new car models being introduced every year. While car buyers may be excited to get the latest model, they often face a dilemma when deciding which car will work best for them. The Toyota Corolla Cross offers exciting features to their customers. In this article, we’ll take a detailed look at Toyota Cross and top SUVs and compare them in terms of interior, exterior, and engine features so you can make an informed decision about which one suits your needs better!

The latest Toyota Cross Premium comes with the 1.8L Hybrid engine of the 4th generation. This engine modification gives an output of 168hp with 305Nm Torque. However, KIA Sportage houses the 2.0L MPI gasoline engine that can produce 155hp and 196Nm Torque. While Corolla Cross can be described as a hybrid SUV, it leads in terms of engine performance.

In the interiors of both SUVs, standard features include a touchscreen with 8 inches cruise control, both rear- and front-facing parking sensors, and a dual-zone automatic air-cooling system. However, there are a few characteristics that make both automobiles distinct from one another.

Each Corolla Cross Premium and Sportage includes the most safety features they share, such as ABS, EBD, VSC, and Hill Start Assist. But, Sportage comes with the Auto-Hold brakes feature, which is not available in Corolla Cross Premium. This could be true; Corolla Cross is a prominent leader in this area, with seven airbags included in the car, whereas Sportage only has two airbags.

The MG HS & MG ZS is equipped with the standard 1.5-liter turbocharged four-cylinder engine paired with a hybrid electric motor. MG HS has 250 Nm with 160hp, and MG ZS has 150 Nm with 116hp.

Toyota Corolla Cross looks like a miniature version of the off-road full-sized and mid-sized SUVs from Toyota’s line-up. The car borrows the front grille, and the bumper design from the latest Hilux adds to the car’s luxurious feel.

Both MG HS & ZS have a subtle but elegant style, featuring projector lamps and unique DRLs. Which also serves to function as a sequential indicator. The vehicle’s front end is more appealing thanks to a striking grille that is flanked by the chrome trimming piece.

Although it isn’t extravagant, the Corolla Cross has an incredibly intuitive, modern, and stylish interior. It is typical of Toyota automobiles. The Corolla Cross’s dash design is basic but familiar, with a limited amount of buttons and screens, making it easy to maintain a neat appearance.

Overall, both MG HS & ZS have a luxurious cabin, with leather stitched on the doors, the seats, and the dashboard. The SUV is also equipped with intriguing features, like an expansive sunroof and LED lights that enhance the visual appeal.

The Toyota Corolla Cross boasts the 4th generation 1.8-liter hybrid motor. When combined with an electric motor, it generates 168 horsepower at 3600 RPM and 305 Nm in torque when running at 3600 RPM. It’s a front-wheel drive, which means all power is directed to the front wheels through an electronic CVT automated transmission.

Each SUV comes equipped with headlamps with projection LEDs. The premium version of Cross comes with LED fog lamps, while the Tucson variant supports a halogen one. Tucson features an edge that has cornering lights on top of Corolla Cross.

The Tucson AWD’s floating 10-inch touchscreen is more effective than Cross’s standard 8-inch touchscreen. However, Corolla Cross Premium has an advantage due to the 7-inches LCD used for multi-information display instead of Tucson 4.2-inch.

Corolla Cross does offer cameras for rearview. However, it’s just a standard rearview, but nothing compared to Hyundai Tucson’s rearview with dynamic guidelines. In essence, it’s an auto-pilot system that can prevent accidents when parking a vehicle. Hyundai Tucson also has an additional feature, wireless charging for devices.

Corolla cross has automatic headlamps and headlights and breaks with fog lights. It also has a projector front fog LED light and a shark fin antenna. Yaris Cross makes a statement imposing wheel arches to its two-tone body that can be added to the Urban grade. However, it lacks front fog lights as well as rear wipers and a remote trunk opener.

The Corolla Cross’s dashboard is an information display that is square and surrounded by shortcut keys. The Corolla Cross car interior offers an 8-inch display system with Apple CarPlay, Android Auto, and SiriusXM satellite radios, whereas Toyota Yaris lacks these accessories. Corolla Cross child seat, rear ventilation, and central console armrest are not present in Yaris.