You are here: Blog Reasons to Consider the Hilux Revo Armoured Bumper 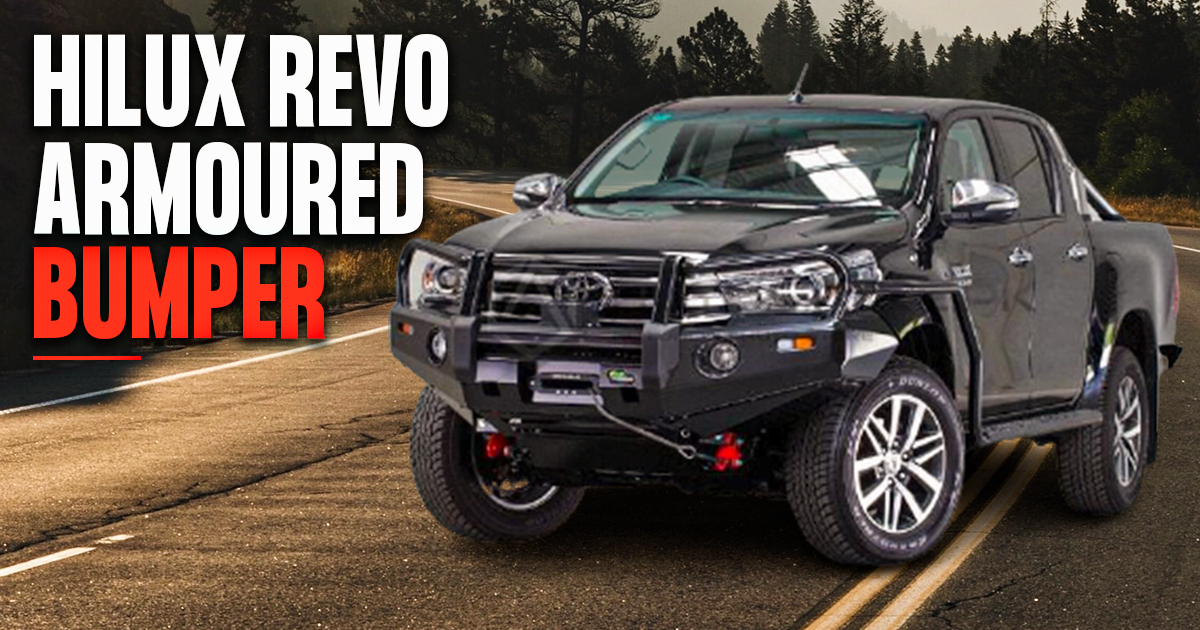 The ultimate purpose of an armoured bumper is to provide additional strength to your vehicle. It protects your vehicle from severe damages from rocks or other vehicles, expanding its durability and improving functionality. Original equipment manufacturer (OEM) bumpers absorb the shock during high-speed accidents, protecting vital components such as engine, transmission, and transfer case.

If you decide to install armour or buy an armoured vehicle and which pieces to choose, the decision depends entirely on the purpose and quality. Hence, Hilux Revo Armoured Bumper is your best option as it has everything you desire to see in your ride.

Not convinced much? Read further to familiarise yourself with the reason to buy a Hilux Revo with an armoured bumper:

What is a Hilux Revo, and Why is it so Special?

The new Toyota Hilux Revo is an upgrade from the previous generation of Helix in terms of performance and aesthetics. You will find a significant improvement in quality, design, and interior with the charms of smart technology and enhanced power. Its mission is to turn heads on any road with its expression of power.

From the exterior, it looks completely different from its predecessors. The new aesthetics of Hilux Revo body accessories carry a keen design, making it look meaner. This model also features a more significant and broader tail with 18-inch alloy wheels, a trapezoidal grille, and projection lamps with full-day running LED lights for better visibility.

The company features Toyota Insignia into these lights, coupled with auto-on and off function for headlights and fog lights. Hence, Toyota body accessories finally complement these features along with intercooler ducts fitted in the hood to give a mechanical look to the front.

As for performance, the car specialists focused primarily on power, torque and fuel economy enhancement. It generates a roaring power of 150 kW @ 3000-3400 rpm and magnificent torque of 500 Nm @ 1600-2800 rpm. Consequently, it performs optimally in different terrains and conditions.

How Does the New Hilux Revo Differ?

The newly developed Hilux Revo armour bumper, as well as its interior, received significant changes. Unlike the previous Hilux Vigo, the wowing 6-speed automatic sequential transmission and the 6-speed manual transmission smooth driving feel. The first thing anyone would notice is the lack of wind and engine noise. The new model’s armoured bumpers, made in black metallic chromium, do not allow the ratting and knocking noises to escape under the hood.

To ensure the safety of the passengers, the prestigious company incorporated SUV accessories into this model. The new model features three airbags – one in the steering wheel, one for the passenger, and one for the driver’s knee protection.

In addition, it features ABS and Electronic Brake Distribution (EBS). It means that a sensor found room in each tyre that applies an adequate amount of brake to reduce the stopping distance.

The interior received a major upgrade in comparison to older models of Hilux. The leather-coveted steering wheel, brown-toned seats, and smart technology have elevated the comfort and convenience of the driving experience.

To install an armoured bumper is quite simple with Hilux Revo armour kit. However, getting professional help is highly recommended:

What to Consider When Buying a Hilux Revo Armoured Bumpers?

Here is the element you should consider before buying Hilux Revo Armoured Bumpers:

What are the Advantages of Having an Armoured Bumper on Hilux Revo?

Following are the advantages of installing an armoured bumper on Hilux Revo:

Toyota’s famous Hilux Revo is everything to elevate your standards. It roars across rocky surfaces and survives the worst collisions due to its durable armoured bumper. With commonly available in the market, it is hard to miss!