You are here: Blog How Can HID Headlights Improve Your Night Driving Experience? 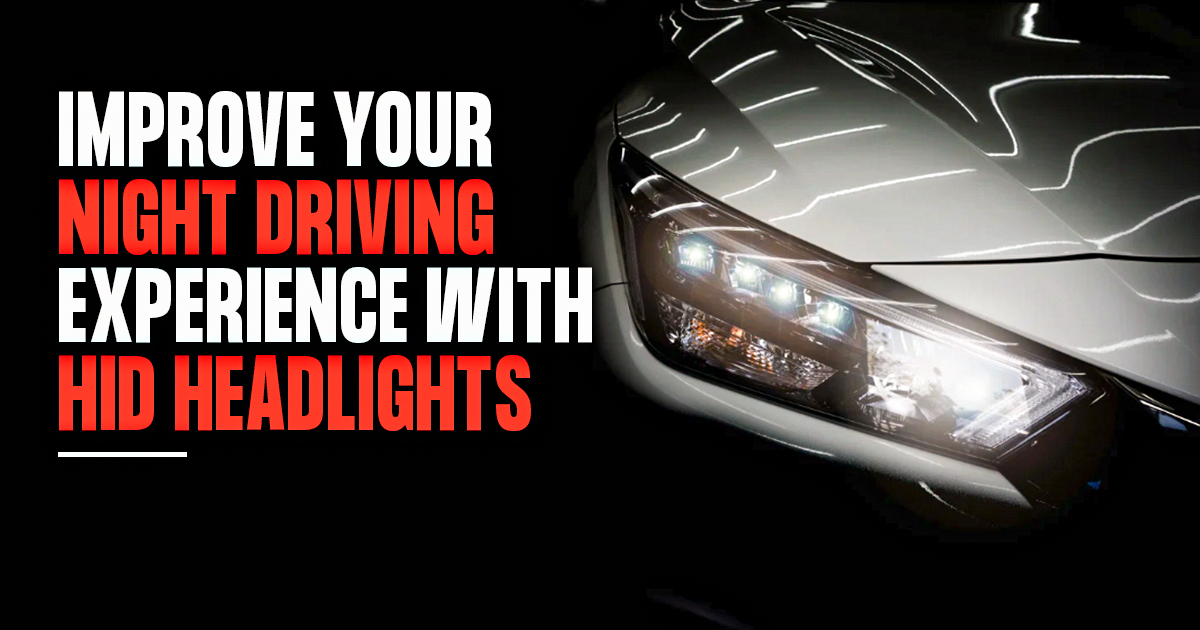 If you’re wondering about “How HID Headlights Can Improve Your Night-Driving Experience?” then read on. HID headlights have an estimated lifespan of 2,000 hours, that’s quite a lot of driving time! But why should you invest in them? They will last much longer compared to your standard headlight. Listed below are just a few reasons you should upgrade your car headlights.

How Do HID Headlights Work?

Unlike halogen headlights, HID operates by transmitting an electric arc across two electrodes made of tungsten inside an arc tube made mostly of quartz. This tube gets filled with an amalgamation of gas and metal salts.
An initial burst of electric power forms the arc. The metal salts then heat the arc, and a plasma is formed. HID headlights are brighter than halogen lights but require a warm-up time, usually 10 seconds.

Halogen vs. LED vs. HID Headlights

LED lights are an alternative to Halogen headlights. They are more bright, consume less energy, and, unlike HIDs, they will last longer. They operate by using electric power generated by vehicles to produce light-emitting diodes.

The High-Intensity Discharge (HID) is an ionization process that creates illumination by transmitting current through two electrodes coated inside a bulb using an ionized gas. As a result, HID headlights have the most brilliant light beams used in modern cars.
They have slowly but likely replaced halogen lighting in most automobiles. They are over two times brighter than halogen light bulbs but are slightly brighter than LEDs. They’re also more energy-efficient than halogen lights. However, they’re less efficient than car LED lights.

The majority of cars still use headlights made of halogen. They are the most commonly used headlights and are the standard option for most vehicles.
The headlights are like the traditional incandescent light bulbs employed in homes. They have an electric filament that is heated and emits illumination whenever an electrical charge flows through it. The halogen gas inside the bulb permits the filament to shine brilliantly.

Halogen vs. LED vs. HID Headlights

Halogen vs. HID, halogen against LED, and HID versus LED headlights are superior? While halogen headlights have been commonplace since the time of the automobile in the past two decades, they’ve been replaced slowly by HID bulbs and, in recent years, LED bulbs.

HID and LED headlights to use less energy than halogen lamps and place less burden on the energy supply for a car, truck, van or. Therefore, the energy will get distributed more efficiently in a vehicle for other tasks.
LED lighting has an Achilles’ heel; it’s a problem with the temperature. In simple terms, LEDs require more cooling time to function than halogens and xenon headlights. This is among the few distinctions between LED and HID headlights. HIDs are more efficient and don’t suffer from heat or cooling problems.

Another advantage of xenon headlights is their longevity. In the first place, HIDs have a longer life span than halogen bulbs. Most reports suggest that HID headlights last for at least two years, and in certain instances, they could be as long as 8000 hours.
LED lights use a small amount of energy throughout a drive, similar to HIDs regarding energy efficiency. LED headlights, on the contrary, have an odd and somewhat tense connection to heat. Although the LEDs themselves do not become hot, they could cause heat to be generated in the surrounding assemblies and connected wiring harnesses.

Like HIDs, LED lighting is more expensive than the relatively inexpensive Halogen bulb. Thus, choosing lights should factor in your need as a driver. Do you want high beam lights? Furthermore, can you afford the hassle that comes with installing LED lights? The simple answer is HID lights for cars.
Advantages of HID Headlights
If you’re looking to invest in upgrades for your car, we recommend an HID headlight. The advantages of using HID lamps are numerous. First, xenon headlights give you a greater variety of visibility while driving. High-Intensity Discharge (HID) headlights have been available for over 25 years, but they have seen a surge in status over the last few years. Following are some reasons which have added to the popularity of these headlights:

HID bulbs emit an intense blue light that provides better visibility than the light yellow produced by standard Halogen headlights. In simple terms, HID bulbs offer better nighttime visibility which allows drivers to respond to emergencies much faster when compared to halogen lamps.
Brightness and Clarity
There are numerous advantages associated with HID-based headlights. They are brighter than standard Halogen bulbs. Furthermore, since the light produced by HIDs is closest to daylight, driving at night visibility is greatly enhanced. Better nighttime visibility will improve reaction speed when needed most to keep your family and yourself protected.

HID bulbs generally last for over 3000 hours of use. In most cases, the bulbs of HID can last as long as the car itself. However, the average Halogen bulb can last approximately 500 hours. Many Halogen bulbs sold today are expected to last only 300 hours.
You’re unlikely to replace your HID lamps until 100,000 miles. However, it’s crucial to remember that they diminish in brightness with time. For example, HID lamps could decrease up to 25 percent of their brightness after about 2000 hours.

HID bulbs can produce up to 110 Lumens of light per watt. In contrast, Halogen lights can produce approximately 25 Lumens for every watt. As a result, HID headlights use approximately 25% less energy than halogen bulbs in simple terms. This leads to more fuel-efficient consumption and improves the lifespan of the charging system in your car.

HID headlights are associated with luxury, only luxury vehicles used to have HID lamps. However, you can get aftermarket kits and change headlights to HID lights due to their availability. The HID lamps do not just look better but appear cleaner when compared to the yellow halogen bulbs. Overall, your car will be noticed due to its aesthetic elevation when you install HID lamps.
How to Upgrade to HID Headlight?
You can upgrade your car lights by visiting our Autostore website/store. Our goal is to provide items of top quality, flawless design, and exceptional performance. We are driven by our knowledge and passion for automotive components. We are committed to many customer-driven projects and are enthusiastic about everything the job entails. If you’re ready to change from Halogen headlights to HID, visit us for the right equipment.

Being able to see is crucial, particularly when driving on unfamiliar roads. The upgrade of your standard headlights on your car into HID lights is a cost-effective enhancement that looks amazing on any vehicle and improves the driver’s safety.